Brakes and clutches all stop or hold or index axes on motion machinery, but they must execute those functions to application-specific parameters. Trends in this technology continue away from strictly stock parts.

Case in point: Tailored power-off brakes for production automation continue to proliferate with demand for holding functions. This is to complement the ever-increasing array of servomotor applications for robotics and factory automation as well as medical and food-processing applications.

Where such motors control axes, there’s need for brakes in case power loss (intentionally or accidentally) and the motor can’t hold the load in place. Here, holding brakes have either a permanent magnet or a series of springs that actuate to stop the motor shaft from moving. Consider one example — a specialty hybrid metric-imperial holding brake from Mach III Clutch. The metric input of this fail-safe spring-applied brake connects directly to a Japanese-made servomotor … and the imperial output side connects to a U.S. gearbox.

No matter the application, clutch and brake specification must be simple. “Especially when engineers are building prototypes or proof-of-concept mechanisms and machines, we also find they need application assistance and hardware quite quickly,” said Rocco Dragone, senior sales and application engineer at SEPAC.

Other agree. “Customized brakes and clutches have always been Mach III’s concentration,” said Lesli Riehemann, president at Mach III. “But for the past several decades, 75 to 80% of our annual production has been non-catalog products. In the past, not many manufacturers were interested in this niche … but times have changed, and now there is much more competition. This has been a positive for Mach III, because customization has become normalized.”

Riehemann posits that the mere mention of the word custom once triggered an avoidance reaction in design engineers due to the association with budget-breaking cost and project crippling lead times. “Now, engineers no longer shy away, and we have many more opportunities to present customized solutions,” Riehemann noted.

Over the past couple of years, Mach III has added personnel to support its engineering department and improve workflows — so that documenting applications, producing custom designs, and estimating and generating quotations happens with accuracy and speed. “On the production side, we’ve also expanded our CNC department and invested in training to ensure our machinists can independently take any new component design from a slug of metal to a high-quality finished part … so we can maintain short lead times,” added Riehemann.

Examples of recent custom designs from Mach III include a stainless spider-coupling clutch. Developed for a food-processing equipment OEM, the sealed clutch withstands washdown and installs quickly with an integral spider-coupling adapter. Another example is a torque limiter with Morse taper connections that slips to protect taps and reamers from breakage.

Again, though there’s been a decline in traditional clutch and brake applications, it’s been more than offset by (among other setups) demand for new brake and clutch options — including holding brakes to pair with smaller motors. This is forcing manufacturers to design and supply power-dense brakes, particularly for new industries in automation, medical, and aerospace.

“We’re filling our shelves to make some items available from stock — including standard spring-engaged brakes and permanent-magnet brakes … and we’re working to stock spring-engaged tooth brakes as well,” added Dragone of SEPAC.

Again, clutch and brake manufacturers’ integration support has meant internal changes. “We recently hired engineers to help with custom products, and we tell customers: Get us involved early in the design, at the concept stage,” said Dragone. The supplier also offers value-added product versions to reduce modest engineering efforts. Most OEMs are happy to pass design engineering to suppliers, Dragone added.

In terms of markets driving clutch and brake design innovation, medical is a leader. “There’s been an explosion of medical companies designing surgery robots and associated equipment. In addition, medical applications need precision and performance … as the real promise of robotic surgery is that it’s more accurate than surgery by a human hand,” added Dragone. So here, SEPAC sees demand for accurate holding brakes with zero backlash. Ten years ago, designing a zero-backlash tooth device for these and other applications was impossible — but recent improvements in the accuracy of cutting tools and machines has made such brakes possible for some applications, said Dragone. 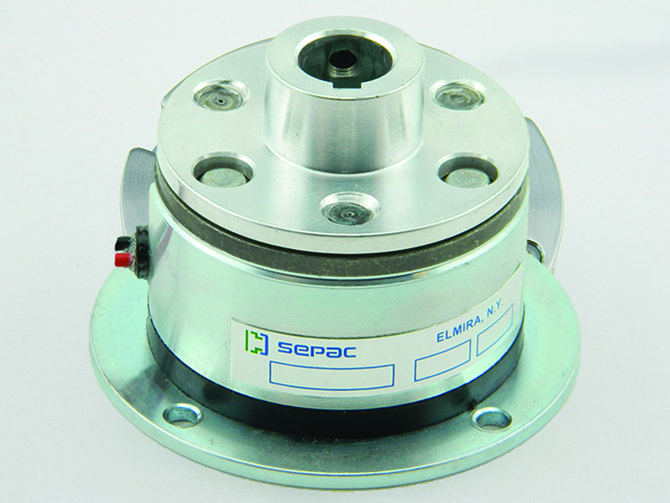