In one recent machine redesign, Florida-based machine builder Hine Automation added precision engineered pulley-bushing assemblies to their SL-200C Vacuum Cassette-to-Cassette-Wafer Handling System for a boost in performance. This machine’s function is to transfer silicon wafers from a wafer cassette to a wafer process module under vacuum. The moves are commanded by computer controls.

Within the SL-200C, the new pulley-bushing assemblies operate on an axis that horizontally moves a robot arm that transfers the silicon wafers into the machine’s process module.

The semiconductor industry that Hine Automation serves is poised for strong incremental growth as the demand for artificial intelligence  accelerates. Shown in the above video is the SL-200C Vacuum Cassette-to-Cassette-Wafer Handling System that employs the Concentric Maxi Torque assemblies. 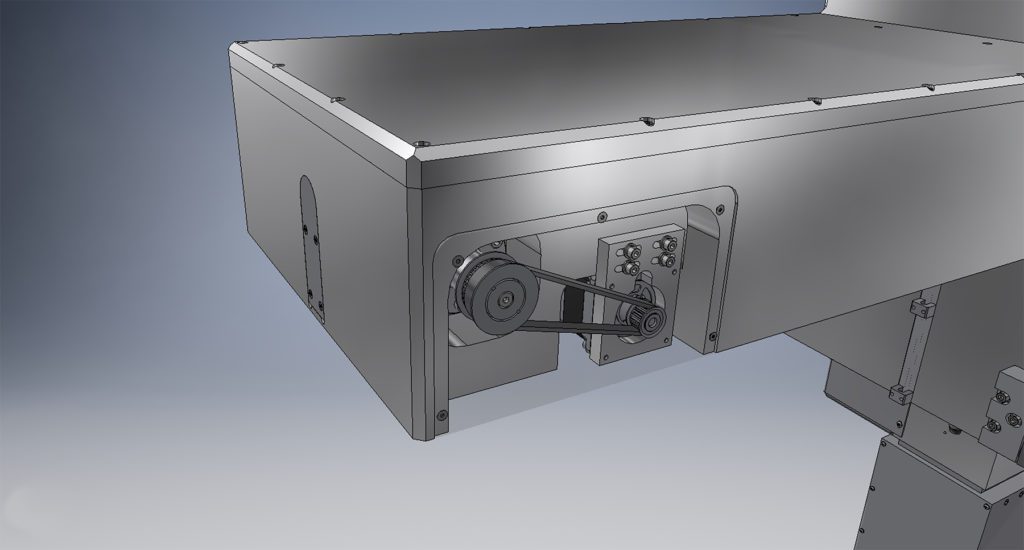 The pulley-bushing assemblies are Concentric Maxi Torque assemblies from Custom Machine and Tool Co., Inc., a leading U.S. manufacturer of precision timing pulleys, drive systems, and other motion-system components. Here’s how the mechanical design works: Custom Machine and Tool Co., Inc. sells the pulley and bushing together as an assembly. A mechanical shrink fit clamps down on the shaft via a setscrew axial to the shaft — which serves as a lever to force the tapered bushing into the matching taper in the hub. As the lever forces the two tapers together, the slot in the bushing compresses, thus clamping the pulley to the shaft with a mechanical shrink fit. If needed, that same setscrew can be removed and used in the bushing’s opposite hole to act as a jack — releasing the shrink fit and allowing for removal or repositioning.

How the component supplier and machine builder connected

Hine Automation regularly exhibits at and attends industry conferences and tradeshows to explore new opportunities to innovate. At one such event, Hine engineers discovered the potential afforded by the Concentric Maxi Torque System — to be a real gamechanger by eliminating backlash. Before this encounter, Hine’s vacuum load-lock machines had a pulley on their main shaft that introduced the possibility of detrimental play (lost motion) during high-torque operation. In contrast, the Concentric Maxi Torque bushing system entirely avoids this problem by steadfastly holding the shaft — in turn boosting the performance of Hine Automation machines. 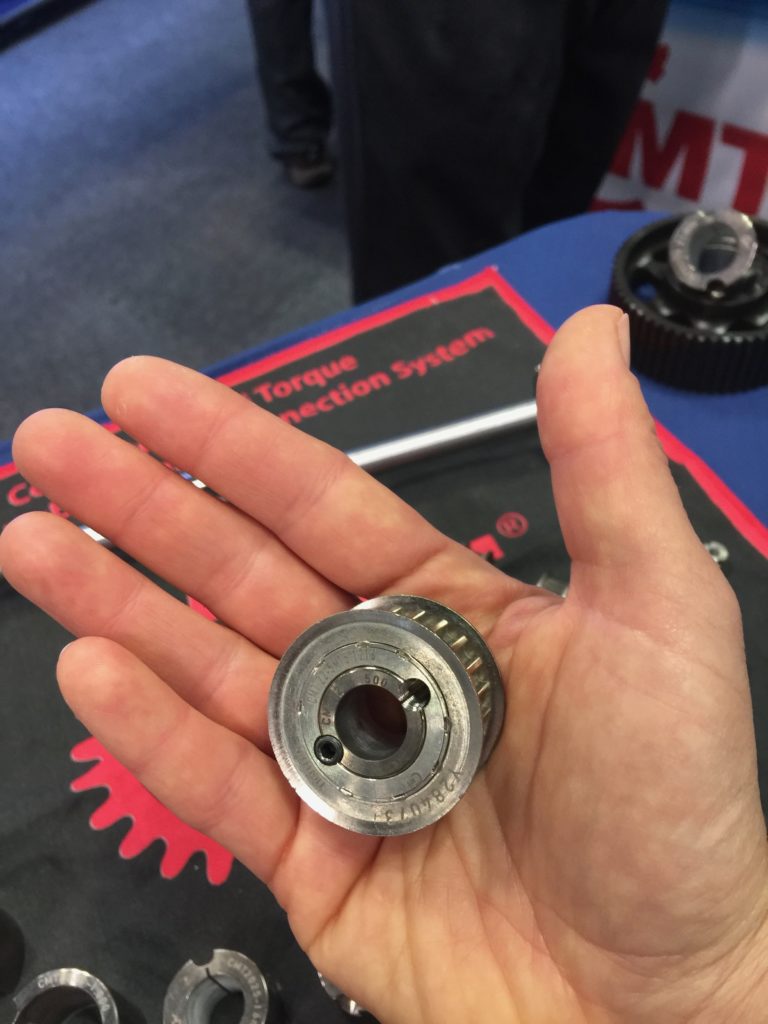 When Hine acquired and installed the Concentric Maxi Torque bushing system, they got an immediate increase in machine performance with enhanced repeatability and reliability. This in turn supports the demanding accuracy and throughput requirements of semiconductor-related automation.

Shown below is one tradeshow demonstration (recorded at the Medical Device & Manufacturing East show of 2018) showing how the Concentric Maxi Torque improves the performance of belt-driven axes.

Hine Automation, which serves customers in the U.S., Europe, and Asia with sales reps and service centers around the globe, is known as a leading designer and manufacturer of intricate automation systems and robotics for the semiconductor industry. Since its inception in 2009, Hine Automation has enjoyed exponential growth. The company began in a small office as the brainchild of three engineers using a name resurrected from a company purchased during the economic downturn. At first, the company serviced legacy robots for the semiconductor industry, but then quickly shifted into designing its own robots. According to one cofounder, the move proved to be quite lucrative for Hine … and the only reason the company wasn’t in the black its first year was because of enormous startup costs.

Now Hine Automation is globally known for designing and building robots for semiconductor manufacturers that provide products to every electronic device in the world.

Within the first few years, the company expanded into industrial spaces adjacent to their first facility — which soon became an overgrown maze of machinery and equipment. After a couple more expansions, Hine Automation now has 14,000 ft2 of manufacturing space in St. Petersburg, Fla. They’re centrally located to the airport, suppliers, and most company staff. The expansion has enabled them to assemble the robots and test them before shipment in a more spacious and comfortable environment. The company regularly ships fully assembled product within 8 to 12 weeks of receiving an order — far faster than the industry standard of more than 12 weeks. In fact, projections indicate that the company will soon outgrow its current facility in the next three to five years.

Competing in a large market with billion-dollar established companies, Hine Automation has carved a substantial niche by servicing small and customized orders. Hence, the machine builder can facilitate quicker turnarounds to market with cost-effective products.

To be more flexible and deliver products faster (and to support the local economy) the company often partners with local suppliers and specialized machine shops to put together the components it designs for the robots. Plus, working locally is convenient for component specifications that can’t always be presented in a drawing. Face-to-face communication is best when a customer’s order requires extra added attention because of its intricacies.

Hine Automation holds sacrosanct their long-standing commitment to strong relationships with their OEM customers. Close collaboration from the design phase to manufacturing ensures fast delivery — usually within an eight to 12-week window. Their robotic components’ quality environments satisfy a wide range of needs … including everything from flexible R&D to stringent manufacturing environments.

Quality and longevity remain primary design objectives. That’s because with each purchase, Hine Automation’s OEM customers make capital investments from $20,000 to $75,000 for robotics and $75,000 to $300,000 for the systems employing them. These OEMs expect the equipment to last 20 to 25 years, and they want the company that made it to be around to service or rebuild it. “We don’t want to give the appearance that we’re unsustainable or that we won’t be around long-term,” Craver says. “It’s not just about product. It’s about product that will be around for a long time.”

In 1964, founder of Custom Machine and Tool Co., Inc. Edward Bennett took the skills and creative savvy he acquired at an early age to begin manufacturing a unique line of screw machine products in the basement of his Scituate, Mass. home. Edward quickly gained a reputation for his dedication to precision and quality — which in turn spawned customer confidence and loyalty. Endowments would serve as a template for son Robert and future-forward thinking inventions, patents, and endeavors.

“Precision isn’t just a watchword … it is our core value.” That’s what CMT president Robert Bennett established when he assumed control of Custom Machine and Tool Co., Inc. from his father in 1980. As Robert apprenticed alongside his father manufacturing sprockets, he gained valuable insights — and began to develop ideas of his own on how he could grow the business through innovation. Remaining true to the values taught to him, Robert expanded the company’s product lines to include timing pulleys, drive systems, and components, and other motion-system components. Robert went on to invent and patent the revolutionary hub-to-shaft connection device — the Concentric Maxi Torque — which allows for precise component positioning and tight runout control on demanding applications, while at the same time retaining installation simplicity sans risk of shaft damage.

Today, working closely with machine builders to meet their quality and delivery requirements, Custom Machine and Tool Co., Inc. can turn around simple and custom designs in a matter of days — and sometimes hours.

“We continue to achieve our mission through extensive manufacturing experience and expertise, strong administrative procedures, and a highly skilled, quality-oriented workforce,” says Robert Bennett. “Our management team coordinates these elements in an efficient manufacturing production system. CMT is committed to doing jobs right the first time to ensure we ship only products meeting expectations. We continue to provide outstanding service to our customers regardless of size, shipping high-quality components on time and at a competitive price. Our dedication to customer service will enable our customers to perform at the highest level.”

Custom Machine and Tool Co., Inc. is also proud to support American Made initiatives by keeping manufacturing jobs in the U.S. to benefit workers and their immediate families as well as their disposable incomes — and thus the viability of local and national economies. “Future generations count on us to do the right thing. Generations before us enjoyed a world in which the U.S. was the manufacturing engine that drove the world economy. We are still a powerhouse, but now we must grow opportunities and recover good-paying jobs for a prosperous future. We owe it to our grandchildren,” adds Bennett.

“Our goods are the best in the world, and we all need to nurture homegrown U.S. industries by tapping them for parts and products.”