In a recent podcast interview, we got the chance to talk with Jeff Johnson of Beckhoff Automation about linear-motor conveyors (also called intelligent transport systems) as well as the planar-motor system from Beckhoff called the XPlanar. Listen in:

Linear-motor conveyors (in many contexts, differentiated as linear transport systems) can be a costly yet sophisticated option for material and discrete product transport. To be clear, most all linear transport systems include linear as well as curved and undulating sections to close the material-handling circuit. The movers on some such systems can travel independent of one another or in groups along various customizable rail systems. High dynamics and precision help the system excel in gapping and diverting applications. Most intelligent transport systems aren’t designed to replace other conveying systems, but traceability with them can reduce the scans required for each piece through an operation.

That’s due to the fact that within the system controls, movers map as individual servo axes … so none are ever lost. Such traceability in traditional architectures can require a prohibitively high number of scanners, which is what makes intelligent transport systems worthwhile for some designs. Here is more information on that from our podcast with Johnson …

COVID has expanded the use of the XTS: Roche recently developed a new machine to execute the manufacture of cost-effective testing and monitoring medical devices — and chose to base their system on a Beckhoff XTS because they needed a compact and flexible system. Even before the initial machine build, the engineers knew there would be design changes requiring rapid development — so the engineers wanted to ensure the build had flexibility. That would let their system change with shifting requirements.

Traditional rotary-indexing systems require that the engineers know the operations’ number of stations upfront, because they index parts to one station at a time. Unfortunately, a rotary indexer with eight stations won’t work in an operation needing nine — so then the engineers are forced to redesign their rotary indexer.

In contrast, intelligent transport systems having enough room around the track can easily accommodate the addition of more stations later — and efficiently serve them with asynchronous motion. In other words, the indexing from station to station can vary (and include buffers between stations that may run their processes at different speeds). In some cases, installations can include multiples of one station type that executes a relatively slow process for a straightforward way to double machine throughput.

Various servomotor-driven stations can be coordinated with the XTS: More specifically, the Beckhoff transport system allows the controls to just register each mover as an axis — like any other standard motion axis … programmed using the same library and motion functions and camming software used in running traditional axes. With the XTS, there’s also a built-in mover-collision-avoidance function — so engineers don’t need to program that. Instead, they simply program gaps between movers that the system maintains no matter where those movers to go. For coordination with station functions, that XTS can be cammed to other axes or vice versa — and it makes for a tightly coupled system because everything is programmed in the TwinCAT software environment. 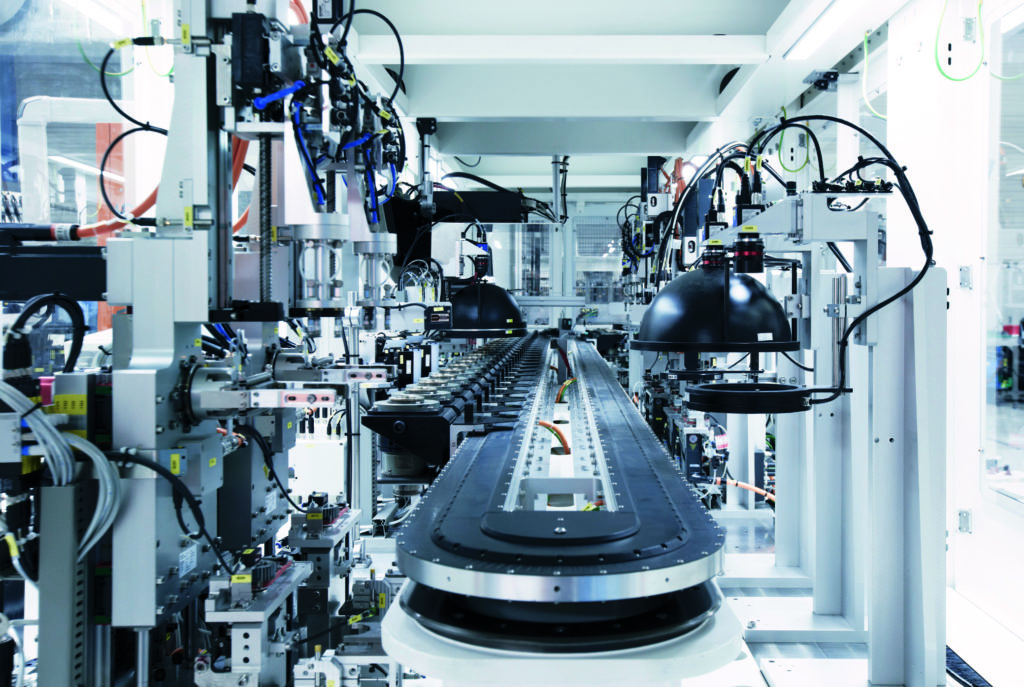 The mechatronic eXtended Transport System (XTS) for linear motion from Beckhoff is currently installed in more than 1,200 real-world applications. 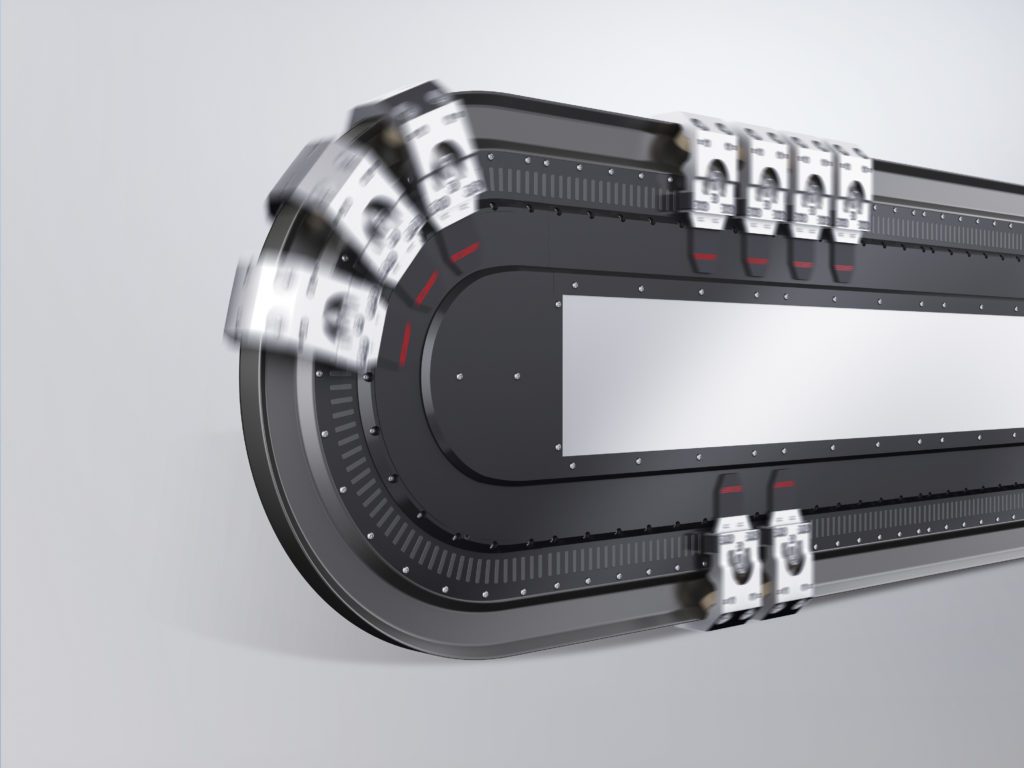 Other application examples: The Roche machine is a typical assembly machines in that it requires the aligning of subassemblies (on one or more XTSs) and inspection throughout. Consider the Roche machine assembling credit-card-sized medical devices with two subassemblies — both containing delicate materials. First the XTS-based system takes the subassemblies to a station that applies engineered adhesive dots … then at the second station, punching and corner-rounding processes occur. Next come specialized optical inspections — and then a final station bonds the device halves together and applies a label. All of these are asynchronous processes taking different amounts of time. Especially with multiple XTS tracks, there are real flexibility and throughput gains in having movers traveling various distances to different stations … and executing jobs in parallel instead of in serial.

Regarding the use of transport systems to replace indexers and conveyors … upon first glance, extended transport systems do resemble traditional conveyors with movers around a track. However, as machine builders rethinking their designs, they’ve begun to build all kinds of operations around the XTS to leverage the smaller footprint and asynchronous motion.

As mentioned earlier, linear transport systems such as the XTS can be costlier than traditional options, though there are situations for which that cost is justified. Case in point: In packaging, one XTS benefit is its asynchronous motion — which contrasts with the rigid synchronous motion of a rotary filler. The former allows use of a linear filler — so instead of having a big rotary indexing table for a filling station, the XTS allows indexing to multiple fill heads. Plus it’s a lot easier to weigh product when it’s sitting still versus spinning around on an indexing table. That means the XTS enables more accurate fills. A final XTS benefit is a smaller machine footprint, as the XTS doesn’t have a big empty space in its middle like rotary indexing tables do.

On the cutting edge: Planar motors

During our interview, we also chatted with Johnson about the Beckhoff XPlanar — a new and fairly glamorous technology often drawing crowds at tradeshows — at least when a pandemic isn’t causing the cancellation of such events. Planar motors use the electromagnetic behavior of its motors for both the movement and suspension of loads … which is why they’re occasionally called magnetic levitation (maglev) stages.

In many cases, planar motors include coils in stationary tiles and magnets in its free-floating mover. This allows the mover to remain untethered by connections for cooling, controls, and power supplies. Special capabilities of planar motors include the ability to limitlessly tilt and rotate movers.

Developed in the early 2000s, the technology until now hasn’t been practical for real-world use. But a series of planar-motor offerings from Beckhoff (the XPlanar series) is now in production.

Some planar motors maintain traceability while providing an infinite number of paths that products or packages can travel … levitating magnetic movers with six degrees of motion up to 5 mm above planar motor tiles — for contactless operation.

Several real-world applications could soon use planar motors. According to Johnson, the XPlanar and really all planar motors are contactless — running movers (also called tiles or pucks) that levitate and execute six degrees of motion. That means these pucks can move in the X, Y, Z, rotational, and tilt directions. applications benefitting from parallel execution of tasks (and not single-strand serial execution of tasks) will benefit most from XPlanar-based designs. That’s especially true of operations outputting lot sizes of one.

Consider lab automation for the handling of many COVID test vials — or really any type of testing involving vials. Depending on the involved processes, vials might need to go to different stations and even different pieces of test equipment. Such laboratory installations using XPlanar-based systems can take vials from station to station with maximal efficiency and accuracy. Plus they’re very flexible … which (as COVID has taught the automation industry) is important. After all, what was known about COVID in February is totally different than what is known now. Engineers designing vaccine production and testing machines probably started designing their equipment months ago. Machines involved in such dynamic global efforts and based on the XTS as well as the XPlanar can be rapidly adapted to what the final product is going to look like.

Johnson reports that XPlanar-based designs do exist, and Beckhoff showed one at the last SPS to demonstrate XPlanar use on a plasma-treatment machine made by a machine builder in Verl, Germany. Several more European OEMs are in their final proof-of-concept design stages of machines based on the XPlanar … and designs for packaging are on the horizon as well. 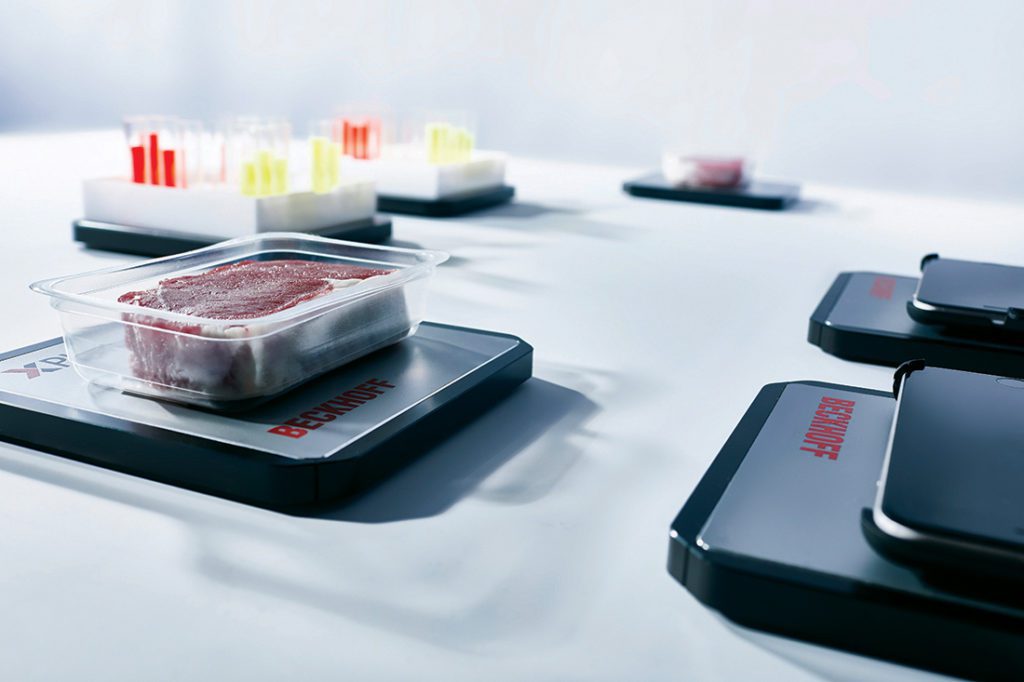 We closed our interview with a chat about Beckoff technology helping owners of machinery (and machine builders) retrofit to address COVID … including Ginolis, maker of rapid-test equipment. Ginolis creates modular workcells and with Beckhoff technology, the company’s engineers were able to quickly redeploy some machines for COVID. Johnson reports that several OEMs have actually done that — taking mothballed machines, stripping off all the old control systems, and replacing them with Beckhoff components. One machine builder that did this had their proof of concept running in two weeks, and management approved. Immediately a dozen more of the new machines were ordered.

When COVID was just emerging, the foresight of flexible and modular machines and software was quite apparent. Modularity makes it very easy to take a workcell and quickly change its motion or process. The key is designing things to be modular right upfront — to quickly react to future market changes. No doubt such modularity and quick machine design will continue to be key in advancing COVID testing, treatment, and prevention.