The newest high-torque gearbox offering from WITTENSTEIN offers extreme torsional rigidity and the world’s first zero-backlash operation for applications that need superior precision in output motion. In contrast with other gear offerings that transmit power over lines of contact on gear teeth, meshing gears in the Galaxie make almost full-surface contact. This allows for tooth contact that’s up to 6.5 times that of certain types of conventional involute teeth. 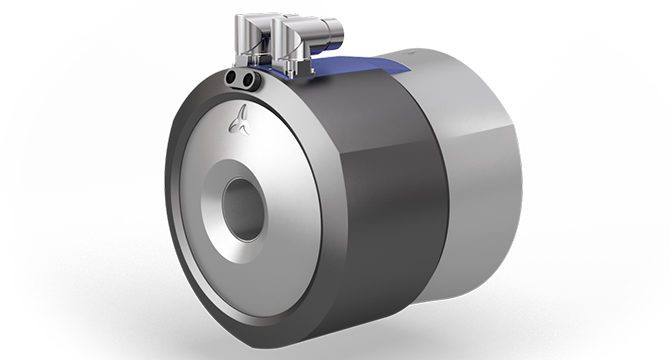 How does it work? In short, the gearbox guides a large array of individual teeth along an internal ring gear. The tooth geometry follows a logarithmic spiral that lets multiple teeth transmit power at once through hydrodynamic contact — covering much larger surface areas than traditional line contact. The result is a gearbox with zero backlash, even at the zero crossing. The logarithmic spiral path of the teeth allows for synchronization accuracy that outperforms traditional hollow-shaft drives with comparable outer diameters. 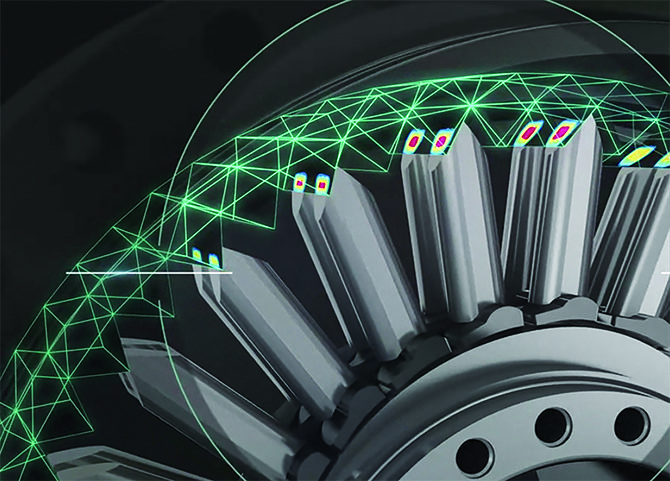 The Galaxie gearbox can combine with a motor with IIoT connectivity. It boasts up to 91% efficiency — 18 to 29% better than traditional strain-wave and cycloidal geared arrangements.

As part of a drive system, the hydrodynamic tooth contact of the Galaxie produces another performance benefit: high overload capability. Emergency stop torque is 150 to 300% better than legacy systems, and torsional rigidity is to 580% higher … so gearboxes of other designs might need to be up to three times larger to deliver the same torque as a given Galaxie. The Galaxie’s design also allows for a very large hollow-shaft diameter in relation to the outer diameter — to 70% larger in some cases.

Broetje-Automation GmbH makes multi-panel assembly cell (MPAC) riveting machines, and now get 20% higher productivity from the setups thanks to Galaxie drives. In short, the MPACs fully automate the riveting of fuselage sections and aircraft struts.

“These machines use thousands of rivets to join the fuselage parts of passenger aircraft made by leading manufacturers,” said Christian Heyers, head of control systems at Broetje-Automation.

Broetje-Automation’s MPAC machines join the fuselage parts of passenger aircraft made by the big manufacturers together using innovation that creates totally new opportunities for designers in thousands of rivets.

The Galaxie imparts precise motion control so the Broetje-Automation MPAC delivers riveting rates to 21 per minute — up from 18 per minute from legacy setups.

Within these MPAC machines, right-angle Galaxie gearboxes go on critical axes. “The Galaxie kinematics deliver enormously improved torsional stiffness and absolute freedom from backlash — even with alternating loads,” added Axel Peters, executive V.P. of fastening at Broetje-Automation. “We get significantly more precise motion control — even at reversal points — and around 30% faster positioning of the MPAC’s lower tool. That’s let us increase riveting rates from 18 to 21 per minute.”

Galaxie in a riveting applivation (at Broetje Automation) from WITTENSTEIN in North America on Vimeo.