Continue to Site
You are here: Home / Drives + Supplies / Nanodrives – Tiny but Mighty 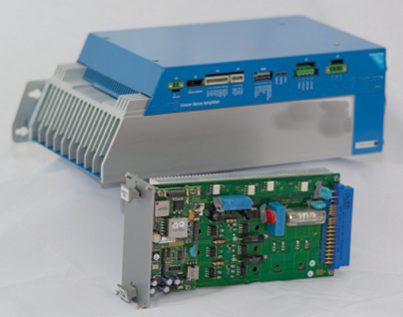 Many industrial applications, such as semiconductor wafer inspection systems and organic LED (OLED) flat panel display (FPD) processing and inspection, require extreme motion performance, with sub-nanometer positioning resolution, sub-nanometer standstill jitter and a following error of a few nanometers while moving at constant low speeds. Until now, linear servo drives were mostly used to address such needs. These types of drives provide good linearity and the low level of electromagnetic noise needed to achieve such a level of performance. However, linear drives have a few drawbacks including lower efficiency and reliability, dissipating significant amounts of heat, and they tend to be bulky and large in size. They are also not available with high voltage and current and can be costly as well.

In semiconductor manufacturing, a new 450-mm generation of semiconductors is significantly larger than the present 300-mm generation and such systems require drives with much higher power, voltages and currents. The required linear servo drives are extremely large but too limited in power and thus, limit the performance and throughput of the systems, increase their costs and negatively affect their reliability.

Figure 1 shows a schematic structure of a typical linear drive. The drive acts like a variable resistor that adjusts its value according to the current needs and to the impedance of the load. The supply voltage is divided between the motor (load) and the drive itself. When the motor is moving at low speed and is required to provide high force (or torque), the current is high, the voltage drop on the motor is low and the voltage drop on the drive is high. The main drawback of linear drives is their inefficiency in the form of dissipating a lot of power, wasting energy in the form of heat.

Figure 2 shows the schematic structure of a switching PWM drive. Here, the drive acts as an on-off switch. The motor acts as an integrator averaging the voltage and current, with the average current being a linear function of the switching duty cycle. At any given moment the switch is either open (no current is flowing through the switch) or closed (low voltage drop on the switch). Thus, the power (heat) dissipated on the switch itself is low.

Compared with linear drives, PWM drives are more efficient. However, in a PWM drive there is more electromagnetic (EM) noise generated. For most applications this isn’t much of a concern. But where subnanometer positioning is required, it can be a significant issue. Another issue is that in a PWM drive the response is non-linear, meaning that at best it is not a well-behaved response. Still, for the vast majority of applications, PWM drives can handle the job reasonably well.

One area where sub-nanometer positioning is essential is in semi-conductor wafer manufacturing. For instance, semiconductor wafer inspection systems require stand-still jitter less than a nanometer and following tracking error of a few nanometers. Stand-still jitter is defined as the amount of deviation from an ideal position. In the semiconductor world, this could be on the order of tens of atoms, which can be extremely difficult to control.

Today, most systems are built to handle 300-mm diameter wafers. The next generation of wafers has a diameter of 450 mm. They require the same and better positioning performance and due to larger size and weight, higher power motor and drives are needed to maintain and improve the machine throughput. Such systems require drives that combine the advantages of linear and PWM drives.

Performance Comparison
A series of tests compares the performance of two types of stages:

1. A linear stage with ironless linear motor, cross-roller mechanical bearings and a Magnascale laser analog SIN-COS encoder with a basic resolution of 0.4 µm.
2. A high-performance 30-mm wafer inspection positioning XY gantry stage with iron core motors and a Magnascale encoder with basic resolution of 0.25 µm. On this stage the stand-still jitter as well as move and settle time were measured using a NanoPWM drive only.

The motion control system consists of ACS Motion Control’s MC4U control module with three types of drives; the NanoPWM drive, a standard PWM drive and a stand-alone linear drive. In each test, drive and control algorithms were tuned for optimal performance and similar bandwidth.

The NanoPWM and linear drives had similar characteristics in terms of voltage, peak current and continuous current. The main performance parameters tested and measured were stand-still jitter and following/tracking error when moving at a constant low velocity. The individual results are summarized below:

Tracking Error at Low Velocity – NanoPWM vs. Linear Drive, Linear Stage
The tracking error was measured when moving at a constant velocity of 1 mm/sec. The results are shown in Figure 4.

Using the NanoPWM drive, the tracking error is significantly smaller resulting in a much smoother motion, which is vital for applications such as the wafer inspection process.

Standstill Error – NanoPWM vs. Standard PWM Drive, Linear Stage
Using NanoPWM, the stand-still jitter is about 2% of the jitter achieved with standard PWM drives. Flat panel display handling systems are large and the voltage and current requirements of the motor and drives are beyond the capabilities of commercially available linear servo drives. OLED displays also require higher accuracies and tracking and stand-still jitter of a few nanometers.

This type of move requires a high acceleration to minimize the theoretical move time, but it’s exactly such acceleration that excites vibrations in the system that increases setting time. Using a NanoPWM drive with an advanced control algorithm named ServoBoost, the specifications are met within a good margin.