A planetary gearbox is a contained geartrain that takes the form of a mechanical component containing gear series. In fact, planetary gear sets may be the most common arrangement in integrated gearboxes. The planetary gearbox connects directly to a precision motor either through a coupling or (in an increasing number of cases) direct integration by the motor manufacturer.

Concentricity of these gears’ orbits make for torque transmission through a single axis. This allows for a compact design space and simple integration. For more information on this, visit motioncontroltips.com/gears-gearing.

Note that as the planet cage turns, it delivers high torque output at low rpm. But not all planetary gearboxes have a fixed element: All gears and elements in differential systems rotate — usually to combine two inputs into one output or vice versa.

Planetary gear assemblies handle load in a way that makes them especially suitable for applications with stringent stiffness requirements, dynamic loads or frequent stops and starts, the need for low inertia and high torque density, and a design objective of high efficiency.

Most standard gearing transmits the axis’ whole load through one gear mesh. 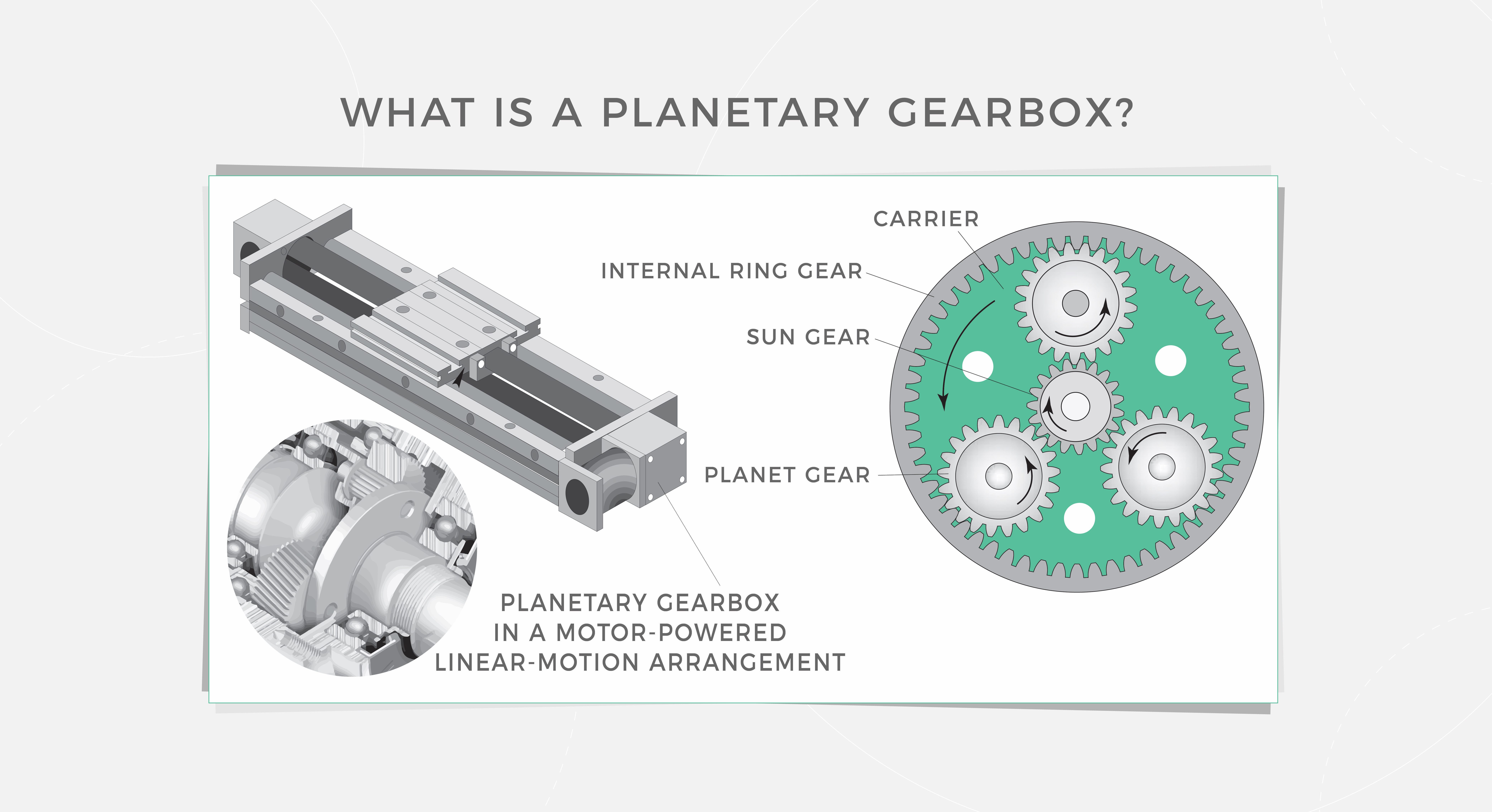 In contrast, the gears in planetary gearboxes usually have at least three gear meshes in action. The inherently balanced nature of these mesh points works to keep lubricant well distributed, which in turn lets planetary gearboxes to in some designs accept input-shaft speeds exceeding 10,000 rpm. Here, the tight tolerances and low backlash of planetary gearboxes (along with high torsional stiffness) help to minimize backlash to boost the precision of the gear-motor assembly — which is particularly helpful in applications where the setup is driving a positioning task. 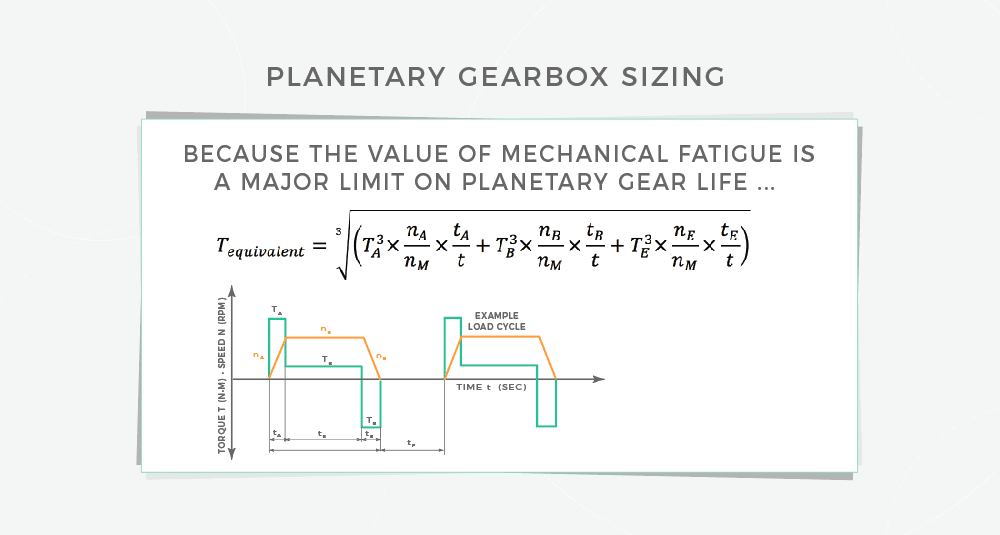 There are several ways to size and select a planetary gearbox. The first option is to choose a fully integrated gearmotor. The other option is go with traditional setup with separately specified subcomponents. For the latter, first analyze an application’s duty cycle and motion profile. Sizing for very dynamic setups requires the use of an equivalent load value calculated with the equation shown here. Note that unlike RMS values to quantify thermal and current limits in motor selection, the value of mechanical fatigue is the main limit in planetary gearboxes … so much as L10 bearing life values, include the third factor. 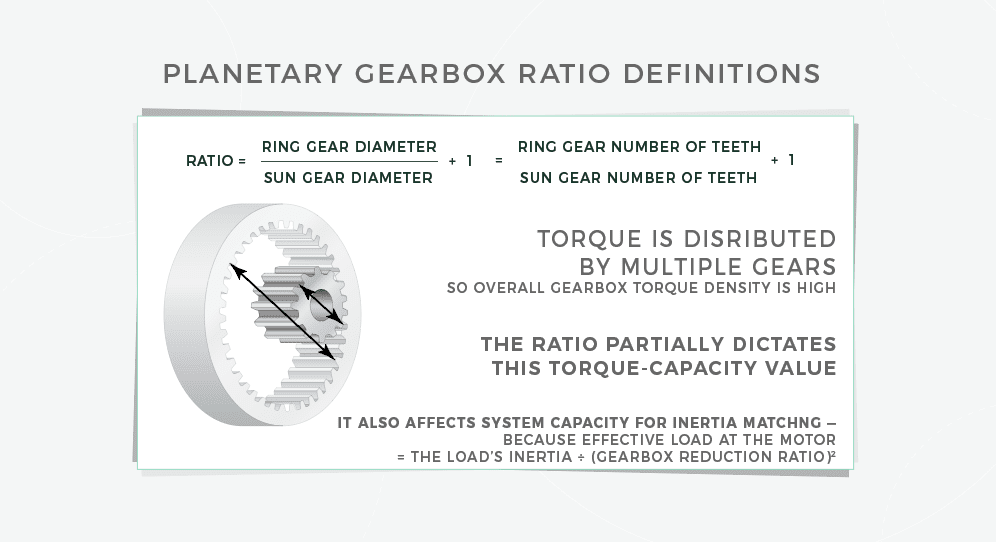 Planetary gearbox rated torque must meet or exceed equivalent load torque to continuously move the load. Why is this important? Well, this rated torque along with the motor model and the gearbox reduction ratio ultimately dictate what gear permutations are suitable for a given application. Besides this value, maximum peak torque — that which an application may need during an emergency stop — is another consideration. Usually it’s a value that expresses the cycles a planetary gearbox will withstand before failure.

Planetary gearbox kinematics guarantees reliable lubricant distribution, which prevents common modes of gear failure. Or reconsider inertia matching, as this is another way planetary gearboxes benefit motion designs. Matching load and motor-rotor inertia yields cost-effective designs that are also easy to control. Mismatches greater than 1:1 usually necessitate a larger motor and controller, while a mismatch below 1:1 indicates an overly large motor that’s dedicating more torque to moving its own rotor than to moving the load. Here, planetary gearboxes give engineers a way to balance design cost with performance. Also note that planetary gearboxes all exhibit minimal backlash, but there are still various grades. Choose options exhibiting 10 or even 20 arc-min. if the added cost of ultra-precise gearboxes (with a couple arc-min. or less of backlash) is unjustified.

As mentioned, there are also integrated options — planetary gearboxes pre-integrated by the motor manufacturer for optimal performance. In some such designs, motor performance is optimized for gear input limitations. For example, the eight-pole design shown here makes for higher torque density and peak motor efficiency within gearbox speed range. Such integrated offerings also relieve design engineers of needing to make torque calculations, motor-model comparisons, and gearbox reduction-ratio choices. Visit motioncontroltips.com/planetary for more examples on how a planetary gearbox works and the forms it can take depending on the machine design.