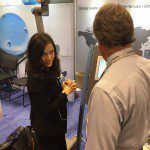 Last week, many of us with motioncontroltips.com and Design World headed to MD&M West 2016 colocated with the ATX West show in Anaheim, Calif. The Internet of Things (IoT) still leads much industry buzz, as does the idea of increasingly smart and connected components and the unabated rise of automation — in the medical industry and elsewhere.

My colleagues Paul Heney, Mary Gannon, and Danielle Collins covered many key items of robotics, fluid-power, and linear-motion news at the show …

Just check out this item from Paul — Live from MD&M West: Festo talks automation safety … or this from Danielle — Things are moving at ATX West 2016: Rollon in Cartesian robots.

I also visited some industry leaders in linear motion. Check it out: Recap of top linear-motion technologies at MD&M West

The biggest developments at MD&M West — multi-axis driving and controlling off of increasingly tiny boards; motors that communicate and get power over Power over Ethernet (PoE); and one major manufacturer putting all of its chips on IoT for all future automation. Enjoy!

In an early booth visit with AllMotion accompanied by our own Scott McCafferty, I got the chance to visit engineer and president David Goodin (in the picture to the left below). He explained how more engineers than ever are using his company’s four-axis drive-controller board in super-compact designs. In the center picture below (click to enlarge) the daisy-chained setup with multiple single-axis boards. In the image to the right, there’s an equivalent design that uses just one board for multiple axes … for a setup with a lower cost per axis.

Here’s tiny fluid-sample-processing machine AllMotion showed at MD&M. In this case, one of the company’s four-axis drive-controller boards (flat and tightly integrated) drives all the axes.