Updated 2022 ⚙️ Trochoidal and cycloidal gearing includes elements that rotate and trace curves around some other element. More specifically, cycloids traced by a point on a rolling element’s circumference include epicycloids (for which the element rolls along the outside of a sun gear or other reference component) and hypocycloids for which the element rolls within a ring or other reference component. In contrast, trochoids (and their subtypes) are traced not by a point on the rolling element’s circumference but rather some point within or without. One particularly common subtype of epicyclic gearing is planetary gearing.

Consider the latter — in a robotic joint employing a motor (running at a few thousand rpm) fitted with gearing for output speeds to 100 times slower. Gearing in such designs also serves to boost acceleration torque for top power density — a priority design objective for SCARAs and collaborative robotics for which the total assembly is essentially a cantilevered mass. Recall that conventional gearing used in such designs (including some planetary gearsets) usually exhibit a very small amount backlash. This is often limited to only a few arc-min. (100ths of a degree) and serves to accommodate lubrication and thermal expansion. However, this backlash can in some cases degrade system accuracy by unacceptable amounts. So let’s take a look at other gear options that avoid the issue.

Trademarked under the name Galaxie, the thrusted-tooth design is a newer and patented high-torque gearbox offering from WITTENSTEIN. It offers extreme torsional rigidity and zero-backlash operation for applications that need superior precision in output motion. In contrast with other gear offerings that transmit power over lines of contact on gear teeth, meshing gears in the Galaxie make almost full-surface contact. This allows for tooth contact that’s up to 6.5 times that of certain types of conventional involute teeth.

How does it work? In short, the gearbox guides a large array of individual teeth along an internal ring gear. The tooth geometry follows a logarithmic spiral that lets multiple teeth transmit power at once through hydrodynamic contact — covering much larger surface areas than traditional line contact. The result is a gearbox with zero backlash even at the zero crossing. The logarithmic spiral path of the teeth allows for synchronization accuracy that outperforms traditional hollow-shaft drives with comparable outer diameters.

The Galaxie gearbox can combine with a motor with IIoT connectivity. It boasts up to 91% efficiency —18 to 29% better than traditional strain-wave and cycloidal geared arrangements. 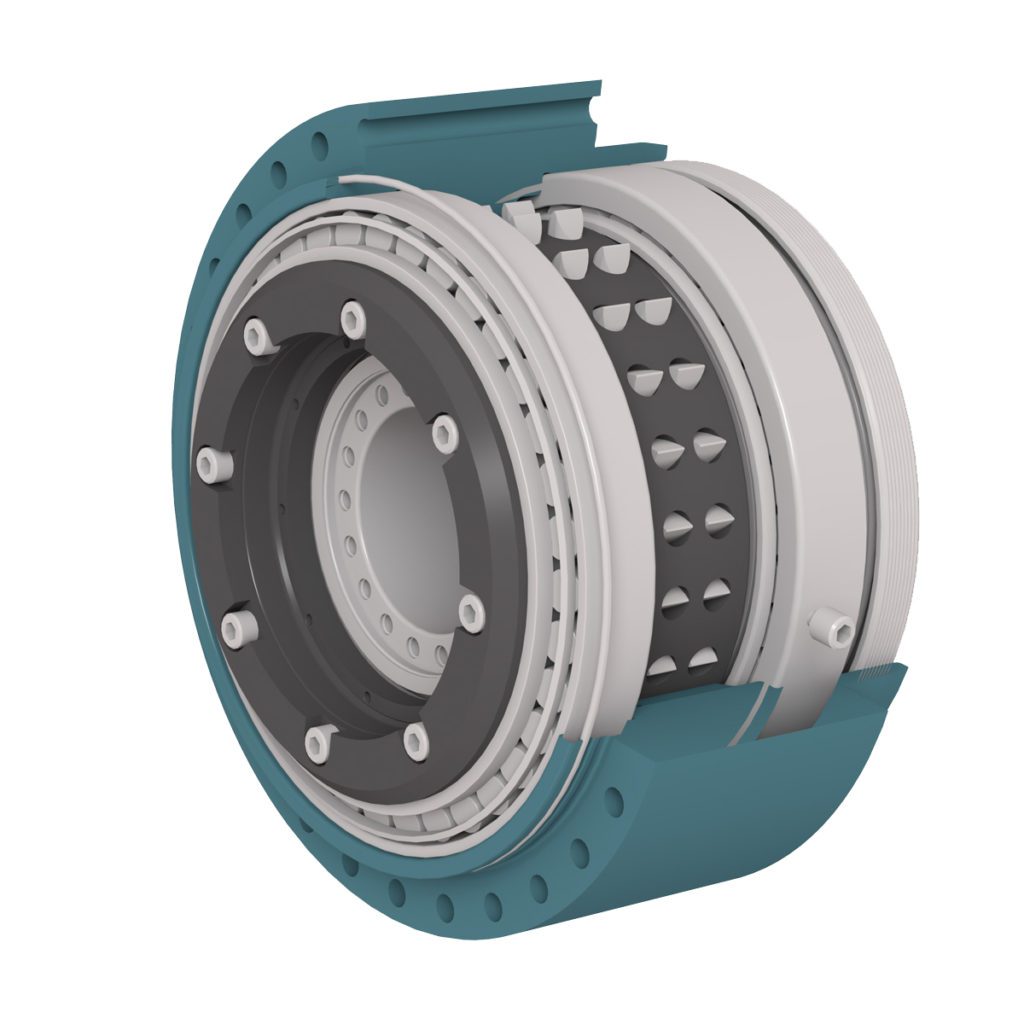 As part of a drive system, the hydrodynamic tooth contact of the Galaxie also delivers high overload capability. Emergency stop torque is 150 to 300% better than legacy systems, and torsional rigidity is to 580% higher … so gearboxes of other designs might need to be up to three times larger to deliver the same torque as a given Galaxie. The Galaxie’s design also allows for a very large hollow-shaft diameter in relation to the outer diameter — to 70% larger in some cases.

The eccentric rolling-mechanism gearheads known as cycloidal reducers are a type of servo gearing that has an input shaft that drives a bearing assembly. This in turn drives a cycloidal disc (sometimes called a cam) that connects to an output shaft. The cam has lobes or teeth that engage with a cam follower — typically with pin or needle bearings. The eccentric cam rotation induces rotation of an output shaft at a lower speed and higher torque than the input.

The main advantage of cycloidal reducers is their property of zero or near-zero backlash (to 1 arc-min.) which makes for high precision and high accuracy. This is especially in demand where highly precise and accurate positioning is required, for instance in robotic applications, machine tools, and similar applications. Cycloidal reducers also feature rolling as opposed to sliding contact, thus experiencing less overall wear. Some cycloidal speed reducers offer zero backlash by combining a compound reduction cam with a full complement of needle-bearing cam followers. 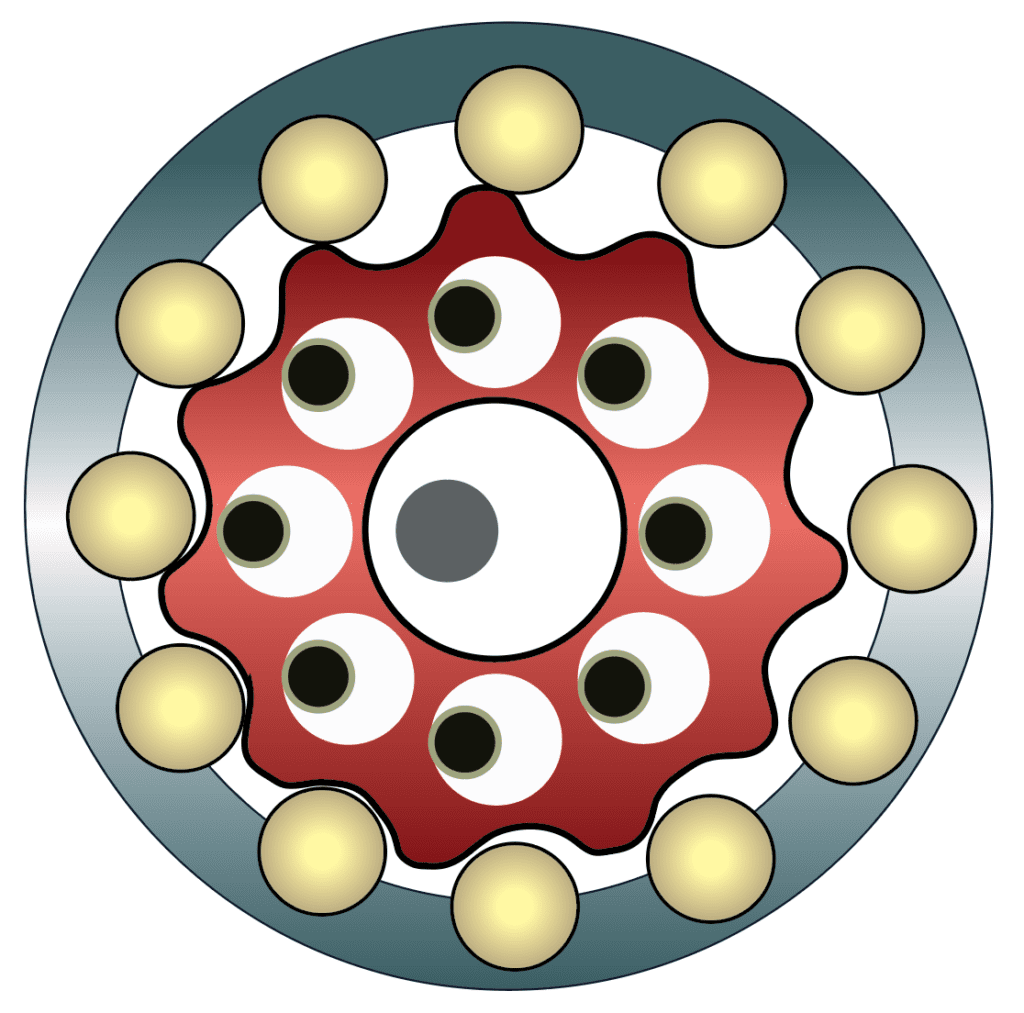 Because of the pin-and-gear structure, cycloidal gearing maintains continuous and distributed power-transmission contact for higher shock resistance than traditional reducers. In fact, some variations can withstand transitory exposure to quadruple their rated torque. High torque density makes for ratios to 185:1 in reasonable gearbox footprints.

The flexspline is a thin-walled steel cup. These cup walls are radially compliant but remain torsionally stiff — because the cup has a large diameter. Manufacturers machine the gear teeth into the outer surface near the open end of the cup … near what one might call the brim. The flexspline usually serves as the output.

The circular spline is a rigid circular steel ring with teeth on the inside diameter. It is usually attached to the housing and does not rotate. Its teeth mesh with those of the flexspline. The teeth of the flexspline engage the teeth of the circular spline along the major (long) axis of the ellipse. So there are two areas of meshing made by the ellipse inscribed concentrically within the ring. Roughly 30% of the teeth are engaged at all times — in contrast with six or so teeth engaged at any time for an equivalent planetary-gear set, and one or two teeth for an equivalent spur-gear set.

Recall that backlash is the difference between the space to accommodate the teeth and the tooth width … and this difference is zero in strain-wave gearing. Elastic radial deformation of the strain-wave flexpline (preloaded by the manufacturer against those of the circular spline at the major axis) acts like a very stiff spring to compensate for space between the teeth that would otherwise cause backlash. Preload is set to keep stresses well below the material’s endurance limit.

The lightweight construction and single-stage gear ratios (to 160:1) of strain-wave gearing let engineers use the gears in designs needing minimized weight and volume. Even small motors can leverage their large mechanical advantage. Certain tooth profiles (of convex and concave arcs) for strain-wave gearing let more teeth engage — for increased torsional stiffness and torque … as well as a longer MTBF.