Continue to Site
You are here: Home / FAQs + basics / What’s the difference between NEMA and IEC motor starters?

A motor starter is a device that controls power to a motor for starting, stopping, reversing, and in some cases, protecting the motor from overload current. Although sometimes referred to as contactors, motor starters actually consist of a contactor and a thermal overload relay.

The contactor is an electromechanical device based on a coil and a set of contacts. When the coil is energized, it closes the contacts, allowing current to flow from the supply to the motor windings. The overload relay monitors current to the motor. If the current reaches or exceeds a predetermined limit for a certain amount of time, the relay activates a mechanism that opens one or more contacts to interrupt the current flow.

Motor starters are manufactured according to either NEMA (National Electrical Manufacturers Association) or IEC (International Electrotechnical Commission) standards, and unlike other industrial equipment, where specifications between two standards often overlap, motor starters manufactured under the NEMA and IEC standards have different performance characteristics and are not interchangeable.

Motor starters are sometimes referred to as motor controllers, which the National Electrical Code (NEC), part 430.2, defines as: “any switch or device that is normally used to start and stop a motor by making and breaking the motor circuit current.”

There is also a difference in how NEMA and IEC motor starters are rated. NEMA ICS 2-2000 defines motor starters by standard frame sizes, including 00, 0, and 1 thru 9. These NEMA sizes indicate the continuous current the starter can switch and carry, along with the motor horsepower and voltage.

In contrast, IEC motor starters are given a “utilization category,” which describes the type of service and duty cycle for which the starter is rated. The IEC standard 60947-4-1 defines more than 20 utilization categories that apply to AC motors, with AC-3 and AC-4 for squirrel cage (induction) motors being most common in industrial applications. 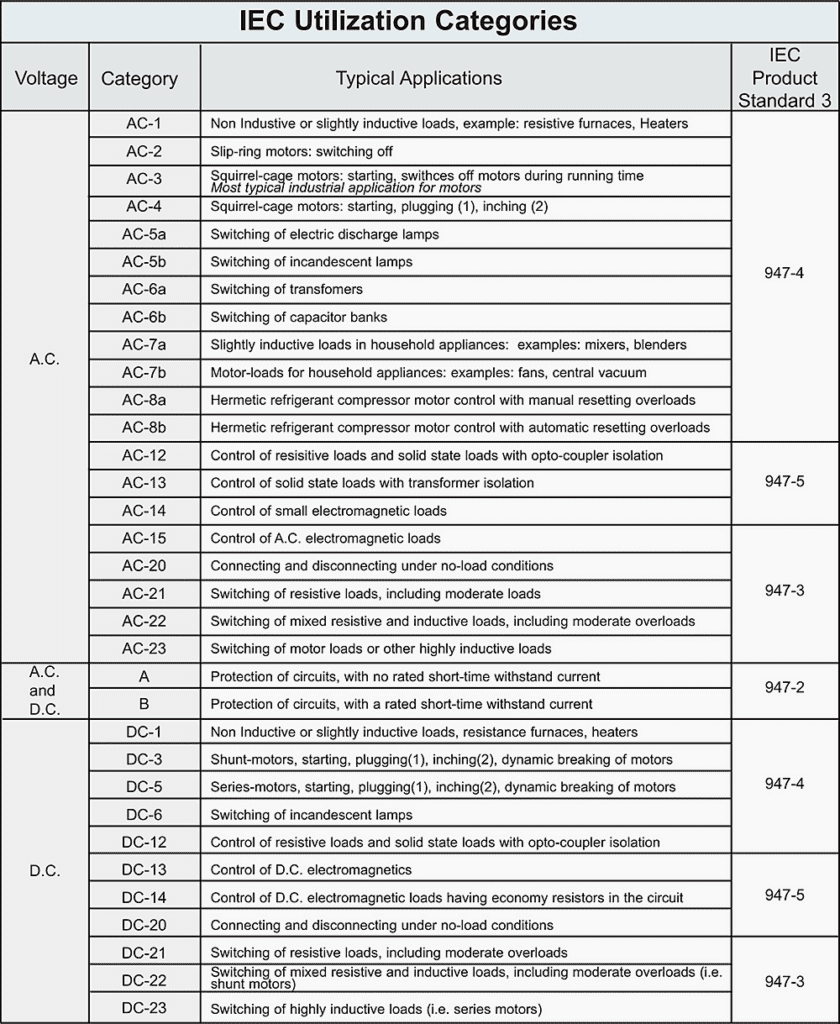 Utilization categories also take into consideration what percentage of the motor’s duty cycle is for jogging and plugging, along with the electrical life of the contactor — two criteria that the NEMA ratings do not account for. On the other hand, NEMA ratings generally result in motor starters that are somewhat oversized for the application. This has important implications for designers, as NEMA ratings are meant to make selection fast and easy, while IEC ratings involve more in-depth application analysis, since they’re meant to help the designer choose the optimal motor starter for the specific application.

There are also important differences between NEMA and IEC motor starters in terms of specific operating and performance characteristics. For example, NEMA motor starters are typically supplied with class 20 overload relays, while IEC versions are typically supplied with class 10 overload relays. (The overload relay class indicates the amount of time for which an overload can occur before the relay trips). There may also be differences in terminal marking and wiring conventions and in the allowable wire size and wire temperature rating between NEMA and IEC versions. (However, it’s important to note that both NEMA and IEC versions undergo the same UL testing.)

For a detailed comparison of NEMA and IEC motor starters, NEMA publication ICS 2.4-2020, “NEMA and IEC Devices for Motor Service— A Guide for Understanding the Differences” is available to download for free. It describes the features, conventions, and characteristics of both NEMA and IEC motor starters and their individual components (contactors and overload relays) to guide users and machine builders in their proper application.